In the heart of cattle finishing country in south east Queensland, graziers Jon and Marina Earl are successfully rearing prime lambs on their Legume property after installing exclusion fencing to control predatory wild dogs. According to Jon, wild dogs are such a massive problem in the local area that many cattle producers are happy if they can achieve calf weaning rates of 80-85 per cent.
“We are deemed by the locals to be pretty rash and daring by running sheep and lambs in this environment,” he said. But, with a background in fencing manufacture and running a fencing contracting business, Jon was confident he could tackle the wild dog problem by establishing exclusion fences around the boundaries of his 80 hectare ewe/lambing block.

Weighing up the costs

This paddock had capacity to run up to 40 cows, which he estimated – with an 85 per cent weaning rate – had potential to produce a gross income of $20,400 from production of 34 weaners worth $600/head. By setting up 3.5 kilometres of exclusion fencing, he is now able to run 300 ewes in this paddock and is achieving an average lambing rate of at least 100 per cent. Jon is now producing three lambs per ewe every two years, or about 450 lambs per year, with a potential income of $54,000 (at lamb values of $120/head). “That is more than double what we could do with cattle and, for us, has been an absolute no-brainer,” he says.

Has it been a worthwhile investment? Read the full case study! 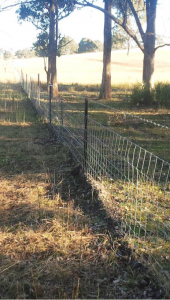