Morven grazier Tim Williams is running more stock than ever and hasn’t had a problem with wild dogs thanks to a decision to put in exclusion fencing in 2012.

He has even increased the carrying capacity of his property ‘Banff Downs’ by more than 10 per cent despite a two and half year dry period, and has plans to increase stocking by a further 10 per cent to 16,000DSE. Most of this increase will be in sheep numbers, which Mr Williams says will be easily achieved now that grazing pressure from kangaroos has been reduced to a manageable level and wild dogs are no longer a major issue.

In 2011 lambing on ‘Banff Downs’ was as low as 40 per cent in some paddocks and wild dogs were slowly encroaching. Mr Williams decided that he had to fence the property or leave the sheep industry for good. The reduced impact of wild dogs and pigs has resulted in average lambing rates across Banff Downs of up to 96 per cent.

To find out more details about the improvement it made to Tim’s business, click here. 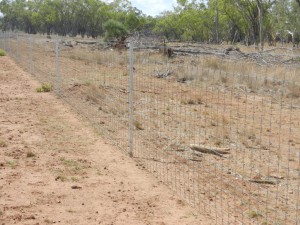